A Journey into Crowdsource Motivation

Tutorials » A Journey into Crowdsource Motivation 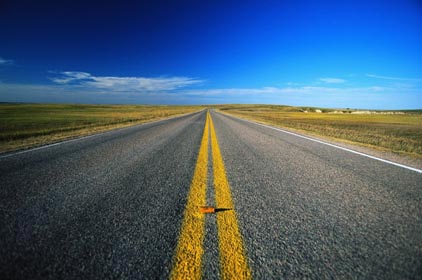 There was a time not too long ago when translation was a solo task, completed by one translator and perhaps a proofreader to catch any errant grammatical mistakes. With the onset of technology, however, there has been great strides in developing new ways to utilize the web’s vast connectedness in order to provide translations with more speed and efficiency.

From this technological expansion, crowdsourcing has emerged as one of the more promising, yet divisive methods within the translation industry. As the paradigm of the industry itself changes to reflect the global connectedness of the web, it seems more and more likely that the crowdsource solution is becoming less of an innocuous trend designed to gain a competitive advantage, and more of a cost-leveraging necessity to compete on the global scale.

But what are the motivating factors for translators to partake in crowdsourcing?

While this big push towards crowdsourcing platforms have been the impetus for many companies, the concept of crowdsourcing can also be utilized for intrinsic methods of translation services. Individuals have proven that they are willing to volunteer their services if they are actively engaged in the subject matter, or are rewarded for their services with non-monetary incentives.

Companies such as Twitter and Facebook have successfully utilized crowdsourcing while translating the content of their sites. They knew their non-English speaking fans wanted to use a version in their native language, so both companies left it up to their users to essentially create the versions themselves. The reward of having one of their favorite sites in their native-language was enough for those language users to volunteer their time to translate the content.

Particularly in Twitter’s case, the company utilized a community of hundreds of thousands of users to initially translate the site into French, Italian, German and Spanish in 2009, and then later added Korean, Japanese, Russian, Turkish and Portuguese.

Laura Gomez, Manager of Localization at Twitter stated, “We believe that investing in the community of translators is an integral part of our international growth and success...they know our product best and capture the Twitter spirit through their translations.” Matt Sanford, Twitter International went on to state, “In the case of Twitter’s Translation Center we rely heavily on our user’s prior knowledge of Twitter itself.”

One of the core tenants that make crowdsourcing translations successful is the audience’s engagement in the subject matter itself. By opening up the process to only a handful of potential translators, you’re limiting yourself to a group that may or may not be fully aware of your company’s core message or brand. However, by engaging the full population, it is much more likely you will be able to find translators who already have an understanding of your company and therefore will provide a much more accurate translation.

This is exemplified in Matt Sanford’s statement, “Twitter has also experimented with Language Service Providers and they do a great job at some types of tasks, while at others they don’t. One quick example to highlight the difference in community translation quality versus professional translators: Twitter uses the word “unfollow” to label [a button]. If you ask an LSP to translate this they will likely return a phrase such as “Nicht mehr folgen” in German. If you ask a translator directly they will probably point out that “unfollow” isn’t a word. Twitter’s language is very informal in English and community translation has helped us keep that playful tone in every language (even the ungrammatical “Entfolgen” in German).”

Wikipedia is another website which not only utilizes crowdsourcing for its main content, but also to translate existing content into other languages as well. Wikipedia accomplishes this by compiling its pages for translation into two separate categories: the “translate” section which lists articles identified as having content in another language, and the “cleanup” section, which lists articles that have been translated but require post-editing or proofreading.

As the data from the table suggests, the majority of the translations from French and Spanish listed on Wikipedia’s ‘Pages needing Translation’ are biographies. While some of these biographies are of historical figures, most are of living people. The arts were also another popular topic for translation. In the translations from Spanish, articles about cities or towns in Colombia, Ecuador, Spain, Venezuela and Mexico (grouped here under the label “geography”) were also frequent. So it seems that the interests of those who have been translating articles from French and Spanish as part of this initiative have focused on arts, culture and politics rather than specialized topics such as science, technology, law and medicine. This goes to show just how important personal engagement in the subject matter is for the user to willingly volunteer their time and translation knowledge.

In fact, in a survey of 76 crowdsource translators, intrinsic motivations are the most often cited reasons for volunteering their services. 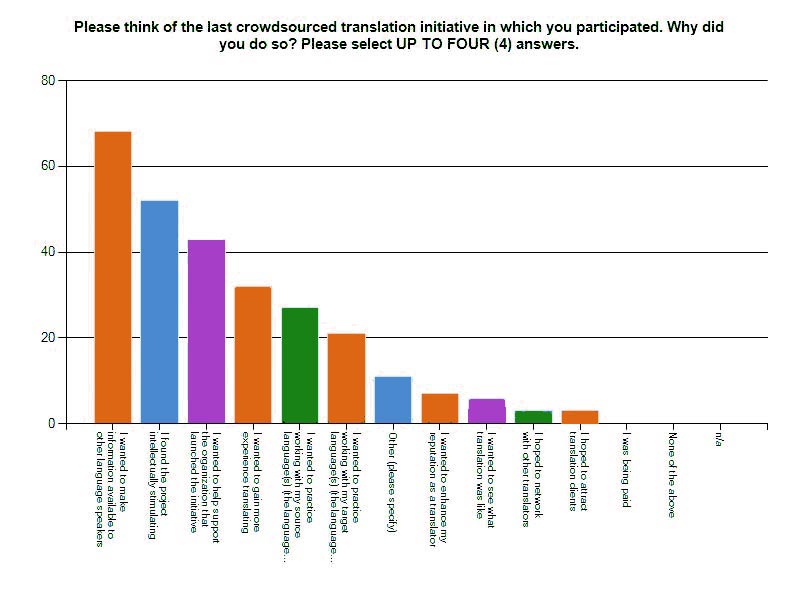 As the chart shows, intrinsic motivations (making information available to others, finding intellectual stimulation in the project, and supporting the organization that launched the initiative) were the motivations most often cited by the translators as the reasons for engagement. However, a significant number also had extrinsic reasons for participating: Wanting to gain more experience translating or practicing their language skills.

Tutorials » A Journey into Crowdsource Motivation