The Changing World of Translation

Tutorials » The Changing World of Translation 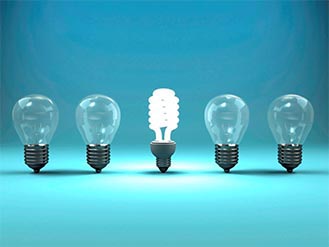 Technology is always changing, and with change there will inevitably be resistance to it from those who are accustomed to the old. While this is the case, it does not mean change is always for the better. It is the job of any industry, including translation, to discriminately determine for the sake of its business which changes are useful and which are not. However, those who do not embrace the concept of change will almost certainly be left out in the cold. It’s estimated that companies that are in favor of technology grow nearly three times as fast as companies that have mixed feelings about it or are against it.[1]

One of the major industrial changes to have taken place in the United States within the past few decades is that of outsourcing, which is the precursor to crowdsourcing. Outsourcing has consistently gained popularity for many businesses, with most spending 60 to 100 percent of their total localization budget on third-party services.[2]

As demand increased over the past few years for translation services, due in large part to the rising global trend, translation companies themselves began outsourcing many of their projects to the fast growing agencies overseas which offered significantly lower rates. In fact, according to a recent report by Common Sense Advisory, even the United States federal government spent US$4.5 billion on outsourced language services from 1990 through 2010 alone. [3]

IBISWorld estimates that the number of translation service providers have grown at an annualized rate of 4% to 49,405 enterprises within the last 5 years.[4] The increase can be attributed to a number of factors, including the global recession causing many individuals to seek additional wages to supplement their income, and the flexibility the internet provides which allows for translators to easily work from home. By utilizing this outsourcing model, US companies leveraged their newly lowered rates against the growing demand and gained the competitive advantage while still increasing revenue.

However, as the growing demand continued to rise, price quickly became the deciding factor for clients, and the lowered outsourcing rates became the standard rather than the exception.

But while the lower outsourced rates have led to an almost standard business model, outsourcing brings with it greater risks to accuracy and accountability. Since you are dealing with outsourced companies, you never truly get to “meet” the company you are procuring services from, rather dealing with them solely through the web or by telephone. This leaves the door open for many “scam” companies to dubiously position themselves as legitimate translation vendors. 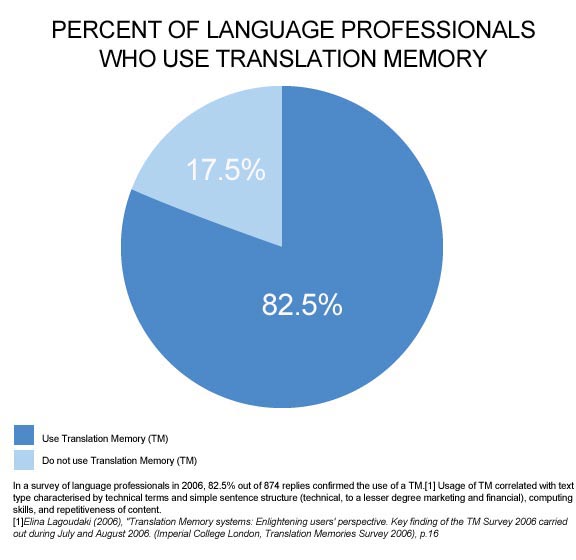 While some competition exists through various types of translation software, industry operators contend that these systems can still sometimes give poor translations and will not provide serious clients with a proper translation due to variations of context and intention throughout any given document. For instance, “branch” could be used to describe both a tree limb and a division within a company. However, it is not possible for translation memory software to be able to differentiate which translation would be appropriate in a given instance.

As technology has advanced over the last decade to the point where network connections have become fast, reliable, and more dynamic, industry specialists began to lean toward more scalable solutions which utilize the full potential of the web. The solution seems to have been found through utilizing cloud-based computing systems, in combination with Software-as-a-Service business models and global micropayment systems such as PayPal.

Since the introduction of cloud computing a few years ago, more and more businesses have begun to move toward cloud-based platforms, and with good reason. Cloud-based systems are much more elastic than their traditional counterparts, whereby a business can pick and choose exactly what platforms they wish to keep internal and which they want to share as part of their outsourcing initiative.

With cloud-based platforms, companies can move away from rigid, self-contained business models and open their work flow solutions to a broader group of workers. Prior to cloud computing, platforms and data were only available internally and systems were confined to working within their own paradigm, which by nature is intrinsically limiting not only in terms of the information itself, but for the company’s employees as well. If a company wished to outsource or share anything outside their own internal workforce, all documents, data, programs, etc. must be delivered to an outside party, either individually, or at the most, limited to only a select number of individuals.

Now, all of the information and necessary resources can easily be standardized, which enables companies to move further away from these internal, captive-based labor models and in turn begin to utilize the cloud to its full potential through crowdsourcing with global labor rates, more specialized skill sets and task management processes.

The concept for crowdsourcing is to allow the internet public to contribute information to solve the desired task. Due to the influx in online users (estimated to be about 3 billion by 2016), the internet has opened the doors to an entirely new workforce with varying expertise and skill sets.

While crowdsourcing may have already started to gain popularity in small doses amongst industry professionals with the proliferation of cloud-computing platforms, crowdsourcing has recently seen a massive surge in primary use by many businesses. In fact, according to Crowdsourcing.org, the trend seems to be almost doubling each year. 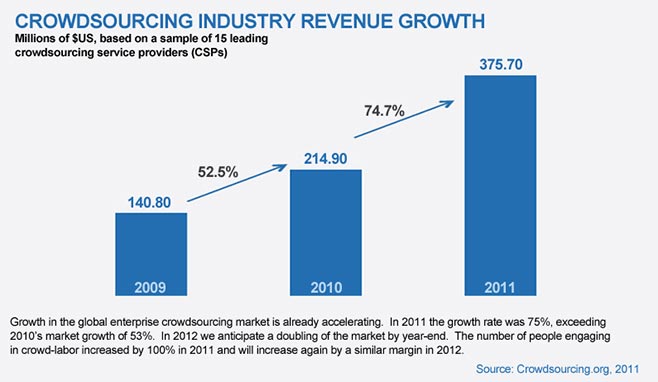 Of course, with the availability of high tech tablet and smartphone computing, it’s not hard to see why the crowdsourcing trend is appealing to workers. It allows the opportunity for work to be performed virtually anywhere at any given time, while still within a fully secure platform.

Crowdsourcing can be particularly useful within the translation industry, as it provides the opportunity to easily reach users from varying backgrounds and language groups and therefore harness the crowd to deliver faster and less expensive translations. According to Rob Vandenberg, “[Crowdsourcing] introduces a whole new group of translators and can dramatically lower translation costs. As a result, the ability to translate content will no longer be limited to companies with large budgets but will be open to small businesses and even micro-writers such as hobby bloggers.”[1]

But the benefit of crowdsourcing doesn’t stop at the ease of accessibility of different language service providers. With the need for agility within the translation industry itself, companies can utilize crowdsourcing for such contextual services as HR, accounts receivable, accounts payable, and even project coordination.

Crowd-based translation tools are designed to make the process of crowdsourcing translations easier by leveraging more control for both the company and for the individual translators. Crowd-based translation tools break up a given project into smaller, more manageable sections and these sections are then accessed by multiple people at once from all over the world. Content owners can easily track the progress made and manage the quality on an ongoing basis, usually within real-time or with a short delay. With the assistance of other features like translation memory, translators also can be prompted with translations in order to ensure quality and consistency throughout, even if the translator is not too familiar with the subject matter.

Some tools provide the ability to embed translation platforms directly into a client’s website, which allows for a completely seamless integration. By doing this, it allows the translator to view the context and structure as a whole, rather than simply seeing the segments in a word document or some other separate file format, which often makes it difficult to understand the context, and especially, how the translation fits aesthetically on the site.

While all of these new technology changes continue to have an influence on the translation industry, the core dynamics have stayed the same. There will always be a need for translation, as the quantity of written content will always be created. How you manage it is entirely up to you.

[2] How to Benchmark Your Localization Budget, Common Sense Advisory (http://www.commonsenseadvisory.com/AbstractView.aspx?ArticleID=754)

[4] Translation Services in the US: Market Research Report, IBIS World

Tutorials » The Changing World of Translation