Navigating Through the Translation of Geographical Names

Tutorials » Navigating Through the Translation of Geographical Names 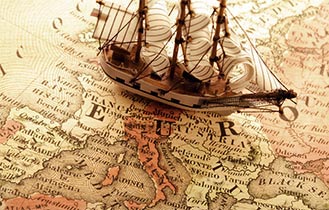 Translating the names of geographical entities is like navigating a ship without any prior experience. While there are tools to guide ships to their destination, a good captain knows how to use his instinct to safely steer the vessel to shore. This same analogy can be applied to translating the names of cities, states, provinces, countries and other geographical terms from and into Spanish, English, and French. Translation of geographical entities does not always follow hard and fast rules. These terms are all but accurate and precise, and exceptions are so frequent that no rule can be systematically applied.

Unlike scientific names, which pretty much stay true to their origin throughout any language, many geographical names have a habit of changing. Perhaps you, yourself, have wondered why certain cities and places are not known in their native forms in other languages, while others are. For example, Firenze is also known as Florencia and Florence, and London is known as Londres and Londra. Cities that change their names in translation are often old European towns, having been founded in antiquity or in the Middle Ages. This is the case of Lisbon, Krakow, Brussels, Rome, Cologne, among others. On the other hand, many cities in the American continent, founded as of the sixteenth century, keep their original name in different languages, Chicago, Toronto, Buenos Aires, Rio de Janeiro and Acapulco are a case in point. It could therefore be deduced that European cities have different names in translation because they are old, but the names of American cities do not get translated, because they are more recent.

However, just like the rules of navigation, this is not always the case. Amsterdam and Madrid are simply transferred, not translated, despite the fact that these cities are European and old. On the other hand, for some cities located in the Caribbean, which are considerably less old, such as Port-au-Prince in Haiti, and Port of Spain in Trinidad and Tobago, the name changes when translated into Spanish, becoming Puerto Príncipe and Puerto España, respectively. Surprisingly, the French preposition ‘au‘ and the English one ‘of‘ (de, in Spanish) are not used in these cases, as could be expected from a literal translation. To make things more difficult to generalize, and even to understand, let me mention the city of Cap Haïtien. This town is, as its name indicates, in Haiti—like Port-au-Prince. Although it is clear that its name begs to be rendered in Spanish as Cabo Haitiano, this is not the case. Cap Haïtien is transferred into Spanish as Cap Haitien. The only adaptation is that it loses the diaeresis (tréma or umlaut.) This is also true of its English form.

In French, translations of Caribbean cities can be thoroughly confusing to those unfamiliar with the subject. Santo Domingo, the capital city of the Dominican Republic, is translated as Saint Domingue, not to Saint Dominique, as could be expected if we were to do a literal translation of the saint’s name. But the fact that Santo Domingo gets translated doesn’t mean that we have a hard and fast rule. Another Caribbean city christened after its patron saint, Santiago de Cuba, keeps its Spanish denomination unchanged when rendering it in French. If this were not confusing enough, in French Puerto Rico is Porto Rico, a spelling that is neither Spanish nor French. The literal translation would be Port Riche. In English, Puerto Rico is simply transferred from Spanish.

Expect the unexpected of cities named after their patron saints, whether in the Caribbean, in the Americas, or in Europe. The Galician city of Santiago de Compostela is translated into French as Saint Jacques de Compostelle, and into English as Saint James of Compostela. This seems logical, as Santiago’s name in French is Saint Jacques and in English he is known as Saint James. Furthermore, it could be expected that when translating the name of a city designated after its patron saint, all that it is needed is to translate the name of the saint; but then again, this is not always the case. Also located in the North of Spain, we find San Sebastián, a city that keeps its Spanish name unaltered in both English and French. It is simply transferred, not translated. This is also the case for Santiago, when we refer not to the Galician town, but to the capital city of Chile. Therefore, the theory that ancient cities change their names in different languages, while newer towns do not, applies to some, but not to all, cases.

As you can tell, there is a lot to take into account when translating or adapting the names of geographical entities. Proper names often require knowing many different languages, even dead languages like Latin and Classical Greek, as well as a considerable amount of history, in order to know how to efficiently translate them accurately. A bad translation can hurt the quality of a document and can even lead to hurt feelings by some, as a lot of pride comes along with ones homeland. It is best to always research outside sources in order to make sure the translation that he or she is using is the correct one. If that is not possible, it is sort of rule of thumb that the best solution is to keep the place’s name in its original language.

Tutorials » Navigating Through the Translation of Geographical Names