Chinese Numerals: How they differ

Tutorials » Chinese Numerals: How they differ 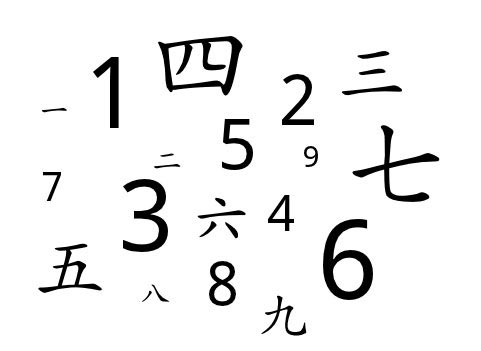 While numbers tend to stay relatively the same throughout different languages, for Asian languages, there are actually different ways to represent numerals.

Today speakers of Chinese use three written numeral systems: the system of Arabic numerals (which are most common and used world-wide), and two indigenous systems. The more familiar system is based on Chinese characters that correspond to numerals in the spoken language. These are shared with other Asian languages as well, such as Japanese, Korean and Vietnamese. Despite the different cultural options, most people and institutions in China primarily use the Arabic system for convenience, with traditional Chinese numerals used more often in finance, mainly for writing amounts on checks, banknotes, some ceremonial occasions, and on commercials.

The other indigenous system is the Suzhou numerals, or huama, a positional system, the only surviving form of the rod numerals. These were once used by Chinese mathematicians, and later in Chinese markets, such as those in Hong Kong before the 1990s, but have been gradually supplanted by Arabic (and also Roman) numerals.

There are characters representing the numbers zero through nine, and other characters representing larger numbers such as tens, hundreds, thousands and so on. There are two sets of characters for Chinese numerals: one for everyday writing and one for use in commercial or financial contexts known as dàxiě (simplified Chinese: 大写; traditional Chinese: 大寫; literally: “big writing”). The latter arose because the characters used for writing numerals are geometrically simple, so a forger could easily change the everyday characters 三十 (30) to 五千 (5000) just by adding a few strokes.

Tutorials » Chinese Numerals: How they differ