Whatever Happened to Babel Fish? A Brief History of Internet Machine Translation

Tutorials » Whatever Happened to Babel Fish? A Brief History of Internet Machine Translation 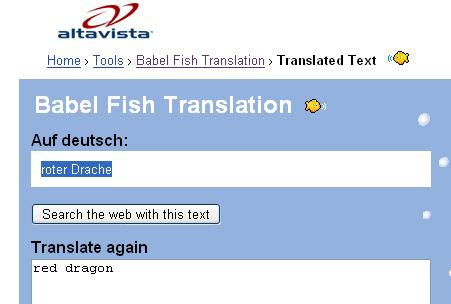 Back in the late '90s, long before Facebook and Twitter, even before Google had taken over the internet as we know it, the leading search engine by a wide margin was AltaVista. People might have occasionally tried Ask Jeeves or Lycos or even HotBot, but if you wanted to really find something, AltaVista was where you went. One day, on the "advanced search" page, a little icon appeared that looked like a yellow fish—a new novelty that amused countless millions by translating text to and from a handful of different languages. Internet machine translation was born!

Babel Fish, named after a fictional species of fish that provided a similar service in Douglas Adams's Hitchhiker's Guide series, is the internet's original online translator. Long before Google Translate and Bing Translator, and even well into their tenure as the current reigning champions of internet machine translation, Babel Fish was the king of online translation. Propelled into the spotlight by the popularity of AltaVista, Babel Fish kept going even after the search giant fell to the popularity Google.

So where did Babel Fish come from? Though seemingly out of nowhere, Babel Fish actually has a long history. Though the online service launched in 1997, it has its roots in SYSTRAN, a machine translation company founded in California in 1968 to help the U.S. government translate Russian texts to English. By the late '90s, with the Cold War long over, SYSTRAN had turned to less covert operations and launched the Babel Fish service for individuals to translate text and websites.

Despite its tremendous runaway success, Babel Fish fell from grace and machine translation services by Google and Microsoft have taken its place. What caused Babel Fish to fall? In 2003, the service was bought by Yahoo!, and—as is their M.O. (see also: GeoCities, del.icio.us, Flickr, etc.)—the service was left stagnant, unsupported, and unpromoted, and simply fade away into obscurity. Though Babel Fish still exists, it is only in a technical sense, as it actually redirects its service through Microsoft Translator.

Tutorials » Whatever Happened to Babel Fish? A Brief History of Internet Machine Translation