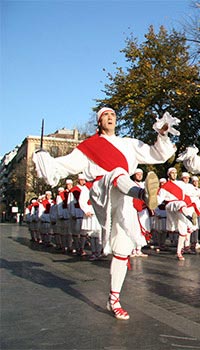 Our translation team consists of many expert and experienced Basque translators. Each translator specializes in a different field such as legal, financial, medical, and more.

We have excellent Basque software engineers and quality assurance editors who can localize any software product or website. We can professionally translate any Basque website, no matter if it is a static HTML website or an advanced Java/PHP/Perl driven website. In the age of globalization, you definitely would want to localize your website into the Basque language! It is a highly cost-effective investment and an easy way to expand your business!

We also offer services for Basque interpretation, voice-overs, transcriptions, and multilingual search engine optimization. No matter what your Basque translation needs are, Translation Services USA can provide for them.

Spoken in: Spain and France

Basque (in Basque: Euskara) is the language spoken by the Basque people who inhabit the Pyrenees in North-Central Spain and the adjoining region of South-Western France. More specifically, the Basques occupy a Spanish autonomous community known as the Basque Country (Euskadi), which has significant cultural and political autonomy. Basques also make up sizable parts of the population in what is known as the Northern Basque Country in France and the autonomous community of Navarre in Spain. The Standard Basque name for the language is euskara; other dialectal forms are euskera, eskuara and uskara. Although geographically surrounded by Indo-European languages, Basque is believed to be a language isolate. It is not an Indo-European language.

The ancestors of the Basques are among the oldest inhabitants of Europe, and their origins are still unknown, as are the origins of their language itself. Most scholars see Basque as a language isolate.

Latin inscriptions in Aquitania preserve a number of words with cognates in proto-Basque, for instance the personal name Nescato (neskato means "young girl" in modern Basque). This proposed language is called "Aquitanian" and was presumably spoken before the Romans brought Latin to the western Pyrenees. Roman neglect of this hinterland allowed Aquitanian Basque to survive while the Iberian and Tartessian languages died out. Basque did come to acquire some Latin vocabulary, both before and after the Latin of the area developed into Gascon (a branch of Occitan) and Navarrese Romance.

Given that the border between Basque and Gascon country is more diffuse than that of Basque and Castilian country, it is commonly assumed that the Basques' origin was in Aquitaine and that they migrated southward.

In June 2006, archaeologists at the site of Iruna-Veleia discovered an epigraphic set with a series of 270 Basque inscriptions and drawings from the third century. Some of the words and phrases found were "urdin" (blue), "zuri" (white), "gorri" (red), "edan" (drink) "ian" (eat), "lo" (sleep), "Iesus, Ioshse ata ta Miriam ama" (Jesus, the father Joseph and the mother Mary), and "Geure ata zutan" (May the Father be with you).