Recent News: Don't Use Google Translate Widget on Your Website 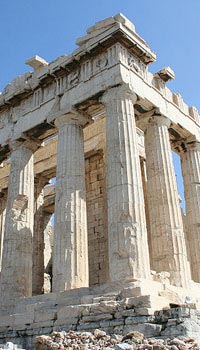 Our translation team consists of many expert and experienced Greek translators. Each translator specializes in a different field such as legal, financial, medical, and more.

We have excellent Greek software engineers and quality assurance editors who can localize any software product or website. We can professionally translate any Greek website, no matter if it is a static HTML website or an advanced Java/PHP/Perl driven website. In the age of globalization, you definitely would want to localize your website into the Greek language! It is a highly cost-effective investment and an easy way to expand your business!

We also offer services for Greek interpretation, voice-overs, transcriptions, and multilingual search engine optimization. No matter what your Greek translation needs are, Translation Services USA can provide for them.

The Greek language, called Hellenic or Ellenika (Ελληνικά) by the people who speak and write it, is an Indo-European language, born in Greece and once spoken also along the coast of Asia Minor and in southern Italy. In classical times there were a variety of spoken dialects, most notably Ionic, Doric, and Attic.

Modern Greek is a living tongue and one of the richest surviving languages today, with more than 600,000 words. Some scholars have overly stressed similarity to millennia-old Greek languages. Its interintelligibility with ancient Greek is a matter of debate. It is claimed that a "reasonably well educated" speaker of the modern tongue can read the ancient language, but it is not made plain how much of that education consists of exposure to vocabulary and grammar obsolete in normal communication. From 1834 to 1976 there was an attempt to impose Katharevousa ("purified" language—an attempt to "correct" centuries of natural linguistic changes) as the only acceptable form of Greek in Greece. After 1976, Demotiki (speech of the people) was finally accepted by the Greek government as both the de facto and de jure forms of the language. A large number of words and expressions have remained unchanged through the centuries, and have found their way into a number of other languages, including Latin, German, French, and English. Typical examples of such words include mostly terminology names, like astronomy, philosophy, thespian, anthropology etc.

There are many theories about the origins of the Greek language. One theory suggests that it originated with a migration of proto-Greek speakers into Greece, which is dated to any period between 3200 BC to 1900 BC Another theory maintains that Greek evolved in Greece itself out of an early Indo-European language.

The first known script for writing Greek was the Linear B syllabary, used for the archaic Mycenaean dialect. Linear B was not deciphered until 1953. After the fall of the Mycenaean civilization, there was a period of about five hundred years when writing was either not used, or nothing has survived to the present day. Since early classical times, Greek has been written in the Greek alphabet, said to be derived from Phoenician. This happened about the time of Homer, and there is one obscure, fleeting reference in Homer's poetry suggesting that he might have been aware of writing.

Attic Greek was the language of Athens; most of the surviving classical Greek literature is in Attic Greek. Alexander the Great was instrumental in combining these dialects to form Koine Greek (from the Greek word for "common") (sometimes called New Testament Greek after its most famous work of literature). This allowed his combined army to communicate and was also taught to the inhabitants of the regions that he conquered, turning it into a "world language". The language evolved during the Hellenistic period, and for many centuries was the "Lingua Franca" of the Roman Empire. From this descended the Greek that was the official language of the Eastern Roman Empire (or Byzantine Empire) and finally the Modern Greek of today. The decline of reading and writing during the Ottoman domination of most Greek-speaking areas caused the language to change considerably during this time. Modern Greek has a somewhat artifical, conservative form called Katharevousa, which includes numerous Ancient Greek words pronounced in a modern way, and the spoken form Dhimotiki, which since 1976 is the official language of Greece, instead of Katharevousa.

Modern Greek has lost the dative (except in a few expressions like en taxei OK), and some of the other forms have changed phonetically. In the following table the left-hand side uses a phonetic form suitable for Modern Greek only, while the right-hand side is the same thing written in the transcription for Ancient Greek, for easier comparison with the table above: Modern | Ancient

Other noticeable changes in the Greek grammar include the loss of the infinitive and the simplification of the system of grammatical prefixes, like augment and reduplication.

The main phonetic changes between Ancient and Modern Greek are a simplification in the vowel system and a change of some consonants to fricative values. Ancient Greek had five short vowels, seven long vowels, and numerous diphthongs. This has been reduced to a simple five-vowel system. Most noticeably, the sounds i, ê, y, ei, oi have all become i.