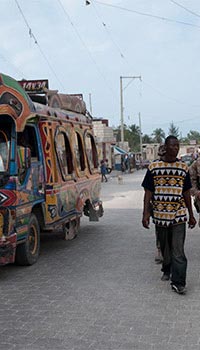 Our translation team consists of many expert and experienced Haitian Creole French translators. Each translator specializes in a different field such as legal, financial, medical, and more.

We have excellent Haitian Creole French software engineers and quality assurance editors who can localize any software product or website. We can professionally translate any Haitian Creole French website, no matter if it is a static HTML website or an advanced Java/PHP/Perl driven website. In the age of globalization, you definitely would want to localize your website into the Haitian Creole French language! It is a highly cost-effective investment and an easy way to expand your business!

Haitian Creole is a creole language based on the French language. It is spoken in Haiti by about 8.5 million people (as of 1998), which is nearly the whole population. Via immigration, about 1.5 million speakers live in other countries, including Canada, the United States, and France, as well as many Caribbean nations, especially the Dominican Republic, Cuba, and the Bahamas.

There are linguistic influences from several West African languages, namely from Wolof, and some Gbe languages, notably Fon and Ewe/Anlo-Ewe. There are two dialects: Fablas and Plateau. Haitian Creole is not to be confused with Haïtian Vodoun Culture language.

In part because of the efforts of Felix Morisseau-Leroy, since 1961 Haitian Creole has been recognized as an official language along with French, which had been the sole literary language of the country since its independence in 1804, and this status was upheld under the country's constitution of 1987. Its usage in literature is small but growing, with Morisseau being one of the first and most prolific examples. Many speakers are bilingual and speak both Haitian Creole and French. Many educators, writers and activists have emphasized pride and written literacy in Creole since the 1980s. There are newspapers, radio and television programs in this language.