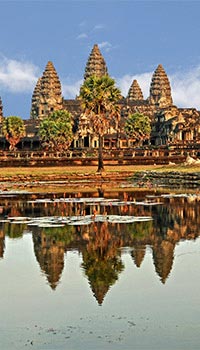 Our translation team consists of many expert and experienced Khmer translators. Each translator specializes in a different field such as legal, financial, medical, and more.

We have excellent Khmer software engineers and quality assurance editors who can localize any software product or website. We can professionally translate any Khmer website, no matter if it is a static HTML website or an advanced Java/PHP/Perl driven website. In the age of globalization, you definitely would want to localize your website into the Khmer language! It is a highly cost-effective investment and an easy way to expand your business!

We also offer services for Khmer interpretation, voice-overs, transcriptions, and multilingual search engine optimization. No matter what your Khmer translation needs are, Translation Services USA can provide for them.

Khmer is one of the main Austroasiatic languages, and has had considerable influence from Sanskrit and Pali. These influences come from the influence of Buddhism and Hinduism on Khmer culture; while other influences from Thai and Laotian are the result of linguistic contact and geographic proximity.

The Cambodian language is somewhat unusual among its neighboring countries' languages of Thai, Lao and Vietnamese in that it is not a tonal language.

Dialects are sometimes quite marked; notable variations are found in speakers from Phnom Penh (the capital city) and Battambang (Pronounced by Khmers as Battambong) which is the countryside. A example is when pronuncing Orange, it is pronounced Kroich (the correct form) by those in the countryside but simply pronounced to as Koich (with the r) by those in the city. The later is the a somewhat lazier version then the previous.

A notable characteristic of the Phnom Penh accent is a tendency toward slang and laziness in pronunciation, much like American urban slang. For instance, "Phnom Penh" will sometimes be shortened to "m'Penh". Another characteristic of the Phnom Penh accent is observed in words with an "r" subconsonant in the first syllable (that is, where r is the second consonant, as in the English word "bread"). The r is not pronounced, the first consonant is pronounced harder than usual, and the syllable is spoken with a dipping tone much like the "hoi" tone in the Vietnamese language. For example, some people pronounce "dreey" (meaning "fish") as "te"; the "d" becomes a "t", and the vowel (long A) begins low and rises in tone.