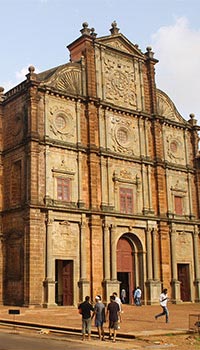 Our translation team consists of many expert and experienced Konkani translators. Each translator specializes in a different field such as legal, financial, medical, and more.

We have excellent Konkani software engineers and quality assurance editors who can localize any software product or website. We can professionally translate any Konkani website, no matter if it is a static HTML website or an advanced Java/PHP/Perl driven website. In the age of globalization, you definitely would want to localize your website into the Konkani language! It is a highly cost-effective investment and an easy way to expand your business!

We also offer services for Konkani interpretation, voice-overs, transcriptions, and multilingual search engine optimization. No matter what your Konkani translation needs are, Translation Services USA can provide for them.

Konkani (Devanāgarī/Marathi कोंकणी koṃkaṇīkoṃkaṇi) is an Indo-Aryan language, although it includes a wealth of words derived from various Dravidian languages. It started as a vernacular of Sanskrit, with inevitable corruption of the words. It has been relatively free of influence of any other language except a little of Portuguese (in the last few centuries) and some Kannada (supposedly during the Kadamba period of 12-14th centuries). Konkani is not a dialect of Marathi. The Goa, Karwar and adjoining areas were claimed by Maharashtra. However Goa was made an independent state and Karwar was included in Karnataka. Although there was a dispute about Konkani's existence of separate language and not the dialect of Marathi.

The Konkani language is spoken widely in the Konkan region consisting of Goa, south coastal Maharashtra, coastal Karnataka and Kerala, each region having a unique dialect and pronunciation style. It is said that the language was spread to these areas by the Goans who fled the Portuguese inquisition of Goa during the early years of Portuguese rule. To this day the temple of the Kula Deva (Family Deity) of most Konkani people living outside Goa, can be found within Goa. Some of these temples were destroyed by the Portuguese and later rebuilt again by the Konkani people (at times in a different location within Goa). Konkani is written in a number of scripts. The dominant ones are Devanagari and Roman, which originated during the Portuguese rule. The Kannada script is used in Mangalore, and other coastal regions of Karnataka. Two other minor scripts have been used: Perso-Arabic by Karnatakan Muslims known as ‘Bhatkali’, descended from inhabitants of the city of Bhatkal, in the south of Karnataka, who converted to Islam during the reign of Tippu Sultan (c1749–1799), and Malayalam script in a small community, centred around the city of Cochin in Kerala state. In recent years, though, this community has started producing publications in the widely-known devanagari script.

The Konkani language had been in danger of dying out — the progressive Westernisation of the Indian subcontinent (including the strong Portuguese influence in Goa from the 16th century) has resulted in English being widely spoken among Catholics, while local influence has led to Marathi being widely adopted by Konkani Hindus living in coastal Maharashtra. This trend was arrested in 1985 by a strong Konkani movement in Goa that had broad support from both religious groups. Konkani is now widely spoken in Goa, and is the official state language. It has since been given official language status in the Indian Constitution.

The first known printed book in Konkani was written by an English Jesuit priest, Thomas Stephens, and entitled Doutrina Christam (the Doctrine of Christ) (1622). It is usually said that the Portuguese destroyed all prior Konkani texts in the 16th century, but is hardly credible that a literary language would not have any other texts ouside the small area controlled by the Portuguese