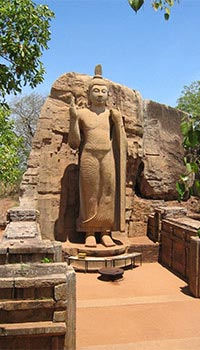 Our translation team consists of many expert and experienced Sinhalese translators. Each translator specializes in a different field such as legal, financial, medical, and more.

We have excellent Sinhalese software engineers and quality assurance editors who can localize any software product or website. We can professionally translate any Sinhalese website, no matter if it is a static HTML website or an advanced Java/PHP/Perl driven website. In the age of globalization, you definitely would want to localize your website into the Sinhalese language! It is a highly cost-effective investment and an easy way to expand your business!

We also offer services for Sinhalese interpretation, voice-overs, transcriptions, and multilingual search engine optimization. No matter what your Sinhalese translation needs are, Translation Services USA can provide for them.

Sinhala (or Sinhalese) is the language spoken by the Sinhalese, the majority of the people living in Sri Lanka (formerly Ceylon). It belongs to the Indo-European family of languages, with strong kinship to Bengali, Pali, Sanskrit and related languages.

Sinhalese, which developed as an island language, has some unique features not found in other Indo-Aryan languages. This is due to its exposure to other language families of the South Asian region such as Dravidian and Austronesian (or aboriginal languages). The Tamil language, which belongs to the Dravidian group, has influenced the structure and vocabulary of Sinhalese to some extent.

The folkloric tale of Vijaya (a Bengali exile) and Kuveni (a Raksha princess) puts the origin of Sinhala into a mythic form very similar to that of the Greek myths. Stone inscriptions, as well as written texts (the Maha Wamsa, a history of the kings of Sri Lanka going back to almost the Buddha's time) suggest that Sinhala is a very old language. Shrines to Skanda, the Hindu god of war, associated with Sinhalese folk lore, can also be found in Sri Lanka.

The mythology states that a Bengali exile, popularly believed to be a prince, landed in Sri Lanka with 700 men. On the island, he met Kuveni, a Raksha princess who bore him two children. As the princely family had to marry into other royalty, most kings married into Indian royal families over time. The last few Kings of the up-country Sinhalese were even pure Tamils who had inherited the kingdom through blood lines.

Sinhalese has many literary works strongly influenced by Buddhism, and often followed the literary trends of India—e.g. the sandesha poetry of India, the literary modes used by Kalidasa and similar Indian dramatic poets are all echoed in Sinhalese literature as attested in the literary debates known as kukavi vada. While Sri Lanka came under Portuguese, Dutch and British colonial rule in turn, it regained its independence in 1948. Nationalist movements in the first half of the 20th century saw the establishment of the helabasa movement, led by the grammarian Munidasa Kumaratunga, which gave new vigour to the language. A more important influence was the rise of an important newspaper culture (led by the Dinamina newspaper established by the Wijaywardena group). A celebrated writer, Martin Wickremasinghe, was one of the well known and influential editors of the Dinamina.

The script used in writing Sinhalese is evolved from the ancient Brahmi script used in most Aryan languages, which was introduced to the island in the 3rd century BC. Around the 6th century, certain characters were borrowed from the Dravidian writing system to replace a few existing symbols. At present the Sinhala alphabet has 56 characters, which is one of the longest in the world.

Sinhala and Tamil were constitutionally recognised as the official languages of Sri Lanka in 1956.