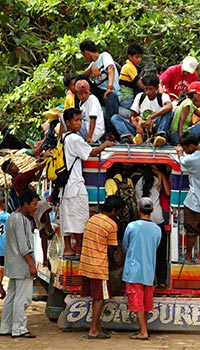 Our translation team consists of many expert and experienced Tagalog translators. Each translator specializes in a different field such as legal, financial, medical, and more.

We have excellent Tagalog software engineers and quality assurance editors who can localize any software product or website. We can professionally translate any Tagalog website, no matter if it is a static HTML website or an advanced Java/PHP/Perl driven website. In the age of globalization, you definitely would want to localize your website into the Tagalog language! It is a highly cost-effective investment and an easy way to expand your business!

We also offer services for Tagalog interpretation, voice-overs, transcriptions, and multilingual search engine optimization. No matter what your Tagalog translation needs are, Translation Services USA can provide for them.

Tagalog is an Austronesian language, commonly spoken in the Philippines, and is the basis for the national language called Filipino. There are an estimated 15 million native speakers of Tagalog and about 50 million others who speak it as a second language.

Due to three centuries of colonization by Spain, many Spanish words have been incorporated into Tagalog. The Tagalog phrase “Kumusta?” (How are [you]?) directly came from the Spanish “¿Cómo estás?”. Foreign concepts such as names of the week and months have been directly adopted. In many other cases, there are equivalent Spanish and Tagalog terms, which can be used interchangeably. An example is the Tagalog words for chair which are upuan, and silya. Silya was adopted from the Spanish silla.

Modern colloquial Tagalog or Filipino typically adopts English nouns and verbs into the speech, even if there are equivalent terms in the native language. This pseudo-dialect is called Taglish. The name is a portmanteau combining the words Tagalog and English.

Tagalog used to have diacritics in written text to indicate pronunciation, but has gradually been dropped in modern texts. The only diacritic remaining is the tilde (~), which is used for the letter ñ.

The common diacritic used was the circumflex accent (ˆ). It was placed over a final vowel to indicate a stress and glottal stop after that vowel. For example, the verb basâ (to wet) is pronounced bah-SA as opposed to the verb bása (to read), which is pronounced BAH-sah.

Before the Spanish came to the Philippines, Tagalog had a script called baybayin (also called alibata), which has largely been replaced with a Latin-based script. This script is part of Unicode and is called Tagalog.