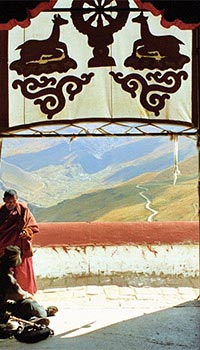 Our translation team consists of many expert and experienced Tibetan translators. Each translator specializes in a different field such as legal, financial, medical, and more.

We have excellent Tibetan software engineers and quality assurance editors who can localize any software product or website. We can professionally translate any Tibetan website, no matter if it is a static HTML website or an advanced Java/PHP/Perl driven website. In the age of globalization, you definitely would want to localize your website into the Tibetan language! It is a highly cost-effective investment and an easy way to expand your business!

We also offer services for Tibetan interpretation, voice-overs, transcriptions, and multilingual search engine optimization. No matter what your Tibetan translation needs are, Translation Services USA can provide for them.

Little is known of Tibet before the 7th century when Buddhism was introduced by missionaries from India. Tibet was a strong kingdom between the 8th and 10th centuries. Lamaism began to develop when the Tibetan kingdom weakened in the 10th century. In the 13th century Tibet was conquered by Genghis Khan, who ruled Tibet through a local puppet government.

Eventually the most important of the Grand Lamas came to be the Dalai Lama. By the early 18th century China established the right to have resident commissioners in Lhasa. When the Tibetans rebelled against the Chinese in 1750, a Chinese army entered the country and tried to restore Chinese authority. Even though China claimed to have regained control on Tibet, the Tibetan government around the Dalai Lama remained sovereign.

The Tibetans lived under a feudal system run by the lamas, with the great monasteries owning most of the land. As late as 1953, of the country's population of 1.25 million, more than 700,000 were serfs. In 1904 the British sent an Indian military force and seized Lhasa, forcing Tibet to open its border with British India. A 1906 treaty with China repeated these conditions, making Tibet a de facto British protectorate.

The Potala Palace in Lhasa

After 1907, a treaty between Britain, China, and Russia recognized Chinese sovereignty over Tibet. The Chinese established direct rule for the first time in 1910. But when the 1911 Xinhai Revolution ended the Qing Dynasty the Chinese troops withdrew to fight the upcoming Chinese Revolution led by Dr. Sun Yat-sen, and the Dalai Lama was able to re-establish his power. In 1913, Tibet and Mongolia signed a treaty proclaiming their independence from China, and their mutual recognition. The independence claim was a term used by revolutionaries the Qing dynasty. The subsequent outbreak of world wars and civil war in China caused both the powers and China to lose interest in Tibet, and the 13th Dalai Lama ruled undisturbed.

China never renounced its claim to sovereignty over Tibet. In 1950 the People's Liberation Army entered Tibet against little resistance. In 1951 a treaty signed under military pressure by representatives of the Dalai Lama and the Panchen Lama provided for rule by a joint Chinese-Tibetan authority. During the 1950s Chinese rule grew more oppressive, and in 1959, local warlords led an armed Tibetan rebellion. The rebellion was soon crushed, and the Dalai Lama had to flee to India. The Panchen Lama was set up as a figurehead in Lhasa. In 1965 the south-western part of Tibet was designated as an Autonomous Region. The monastic estates were broken up and secular education introduced. During the Cultural Revolution there was a campaign of organized vandalism against Tibet's Buddhist heritage as the Red Guards did with the Chinese cultural heritage all over China.

Since 1979 Chinese policy in Tibet has veered between moderation and repression. Most religious freedoms have been officially restored, but the imprisonment of monks and nuns is still a daily routine in Tibet.

Tibet is located on the Tibetan Plateau, the world's highest region. Most of the Himalaya mountain range lies within Tibet; Mount Everest is on Nepal's border with Tibet.

The atmosphere is intensely dry nine months of the year. Western passes receive small amounts of fresh snow each year but remain traversable year round. Low temperatures are prevalent throughout these western regions, whose bleak desolation is unrelieved by any vegetation beyond the size of low bushes, and where the wind sweeps unchecked across vast expanses of arid plain. The Indian monsoon exerts some influence on eastern Tibet but essentially none on western Tibet. Northern Tibet is subject to intense heat in summer and intense cold in winter.

Amdo (a mdo) in northeast → the provinces of Qinghai, part of Gansu and part of Sichuan

Kham (khams) in east → part of Sichuan, northern Yunnan and part of Qinghai

U (dbus) in center → part of Tibetan Autonomous Region

Several majors rivers have their source in Tibet, including: