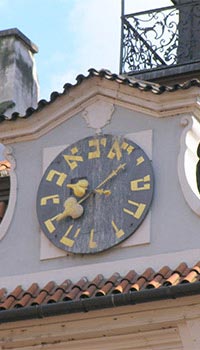 Our translation team consists of many expert and experienced Yiddish translators. Each translator specializes in a different field such as legal, financial, medical, and more.

We have excellent Yiddish software engineers and quality assurance editors who can localize any software product or website. We can professionally translate any Yiddish website, no matter if it is a static HTML website or an advanced Java/PHP/Perl driven website. In the age of globalization, you definitely would want to localize your website into the Yiddish language! It is a highly cost-effective investment and an easy way to expand your business!

We also offer services for Yiddish interpretation, voice-overs, transcriptions, and multilingual search engine optimization. No matter what your Yiddish translation needs are, Translation Services USA can provide for them.

Yiddish (ייִדיש, Jiddisch) is a Germanic language spoken by about four million Jews throughout the world. The name Yiddish itself means 'Jewish' and is originally short for yidish daytsh, or 'Jewish German'; an older term in English is Judaeo-German. The language arose in central Europe between the 9th and 12th centuries as an amalgam of Middle High German dialects that also borrowed heavily from Hebrew/Aramaic terms found in traditional Jewish literature and from the Romance languages.

Like Judaeo-Arabic and Ladino (Judaeo-Spanish), Yiddish is written using an adaptation of the Hebrew alphabet. However, Yiddish itself is not linguistically related to Hebrew, even though it absorbed hundreds of Hebrew and Aramaic terms taken from Jewish tradition.

One curious aspect of the language is that it uses Latin derivatives for many of its words relating to religious rituals, apparently borrowing the terminology from Old French as spoken in Alsace and used by the Catholic Church. As an example, 'say grace after meals' is, in Yiddish, bentshn, which is apparently cognate with the same term that gave English the word benediction; while davnen, meaning 'pray', is thought to be descended from the same root as the English word devotion. The Yiddish verb leyenen 'to read' also reflects a Romance background. There are a handful of other words which also derive from Old French, the most common of which, tsholnt (a Sabbath stew, spelled cholent in English), probably derives from the French words chaud (hot) and lent (slow).

Largely because of the influence of Jewish entertainment figures, many Yiddish words have entered the American English lexicon. In 1968, Leo Rosten (1908 - 1997) published his seminal The Joys of Yiddish (ISBN 0743406516), a highly entertaining introduction to words of Yiddish origin used in the English of the U.S.A. See also "Yinglish".

The three great founders of modern Yiddish literature were Mendele Mocher Sforim, Sholom Aleichem, and I. L. Peretz. Solomon Rabinowitz, better known as Sholom Aleichem (1859 - 1916), is known as one of the greatest Yiddish authors and humorists, the Yiddish equivalent of Mark Twain. A collection of his stories about Tevye the Milkman was later the basis of the Broadway musical and film Fiddler on the Roof.

At the start of the 20th century, Yiddish seemed to be emerging as a major Eastern European language. A rich literature was being published, Yiddish theater and film were booming, and it had even achieved status as one of the official languages of the Byelorussian S.S.R.. Yiddish emerged as the national language of a large Jewish community in Eastern Europe that rejected Zionism and sought to obtain Jewish cultural autonomy in Europe. In mid-century, however, the Holocaust led to a dramatic, sudden decline in the use of Yiddish, as the extensive Jewish communities, both secular and religious, that used Yiddish in their day-to-day life were largely destroyed.

In the United States, the Yiddish language bound together Jews from many countries, whose national origin was often as important as their Jewish identity. Within some families, marrying across national origin lines was seen as equivalent to marrying out of the faith. American Yiddish music was another binding mechanism. Michel Gelbart, a very prolific composer, probably best known for "I Have A Little Dreydl," wrote music that was very Jewish and very American. In some ways this was a continuation of the conflict between Hebrew (and Zionism) and Yiddish (and Internationalism) as the means of defining emerging Jewish nationalism.

Meanwhile, in Israel, Yiddish was displaced by Modern Hebrew. This was associated with a major battle between religious and secular forces. The larger, secular group wanted a new national language to foster a cohesive identity, while traditionally religious people desired that Hebrew be respected as a holy language reserved for prayer and religious study.

In the United States, most Yiddish speakers tended not to pass on the language to their children who assimilated and spoke English. The major exception to this can be found in the Ultra-Orthodox Jewish communities in New York, especially in Brooklyn, as well as in some smaller Ultra-Orthodox communities in other cities such as London. Among the European Ultra-Orthodox, Hebrew is generally reserved for prayer and religious studies, while Yiddish is reserved for daily life.

Bubkes (also spelled "bupkis") - nothing, as in He isn't worth bubkes (from Yiddish bobkes 'little beans')

Maven - expert (from Yiddish meyvn, from Hebrew mevin 'one who understands')

Mensch - an upright man; a decent human being (from Yiddish mentsh 'person')

Nachas - pride (usage: I have nachas from you)

Plotz - to burst, as from strong emotion: "I was so angry, I thought I'd plotz!" (from Yiddish platsn 'to crack')

Shlemazl - unlucky person (from Yiddish shlimazl, from German schlimm 'bad' and Yiddish mazl 'luck'). The difference between a shlemiel and a schlemazl is described through the aphorism, "A shlemiel is somebody who often spills his soup; a shlemazl is the person the soup lands on."

Shlep - to drag (an object)

Shmeer - to spread, e.g. the cream cheese on your bagel

Shmuck - penis; a jerk, an unpleasant person (from Yiddish shmok)

Shnorrer - beggar or person always asking others for services

Shtup - to have sex, screw (from Yiddish shtupn 'push, poke')