Why Is App Localization Critical For SEO 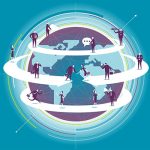 Suppose you have a great new app which you are totally convinced it is going to be a massive success. In order to make it available and usable for audience across the globe, you must have app’s interface translated and adapted so it is able to meet varying cultural and language expectations. What users desire is to feel as if the apps they download are created on their soil and from their own fellow compatriots－it is that much they expect impeccable interface in their own language, with correct terminology, culturally sensitive content and fully adapted to their needs.

So, the first step is translation. If you have Google Translate in mind, the best suggestion is to remove that thought at once. After all, Google Translate is useful under certain circumstances, but it can be rather confusing and even embarrassing for app’s interface translation which should lead to its localization.

What actually is App Localization?

App localization is the process of adaptation of an app in order to appear tempting and suitable for a geographically specific target market. What you really want is to ensure your app becomes popular, successful and therefore profitable for your business outside the country of origin as well as within it. It includes, or better said, it succeeds translation, but it surpasses such a task. As much as translating the language of your app is a huge part of this, the cultural rules and preferences of the target market must be attentive to. What can be innocuous or even in some countries, it could actually be very rude and offensive in another country. These factors neglected may ruin your app’s success which you surely do not want.

Why is App Localization important?

Fitting the needs of users who speak other languages so that everything typical for their cultural and speaking environment is optimized for them. Such process includes ranges from units of measurement to currencies; from idiomatic expressions to cultural purchasing habits, abilities and customs. With properly localized app, you make sure it becomes appealing to a huge variety of customers in different locations all over the world, thus making a breakthrough on the international market and a gaining profitable product which will grow daily.

Lost in translation and localization

Have in mind that you need to do a thorough research of the culture whose members you want to attract. Avoid any mistakes or mishaps that could be misleading or even offensive to your audience. People and cultures are accustomed to different symbols and gestures, and before they realize the whole thing is a huge mistake, they will give up on your product or your app because it brings disrespectful and unpleasant associations to their minds.

Such thing a Pepsi campaign encountered a few years ago. Their successful slogan, “Come alive with Pepsi Generation” was terribly translated and localized in China. Instead of conveying the message of rejoice and revival, metaphorically of course, after taking a drink of Pepsi, the new slogan was directly translated to “Pepsi brings your ancestors back from the grave.” Some audience would have a good laugh about it, but majority would find it frivolous and offensive. Especially in China, a country with a long tradition in regards to paying respect to their forefathers. Consequentially, this campaign was a immense failure and the company was deprived of an enormous income. Another similar mishap, and they could close their doors to this huge market. The bottom line is that mishit localization of any nature, whether it is a drink brand or an app, invokes serious consequences and caves in the brand’s reputation.

Do I need to localize my App?

Hoping that you haven’t got discouraged by the previous example and topic, we want to discuss further issues. Aside from any brands which need to be sold across the globe, mobile apps demand localization more than others. An advantage which apps implicate is the fact that they do not require any physical factors like shipping and distribution to reach another part of the world. Since they are no tangible, there are no extra expenses in this field nor any concern about the delivery. On the other side, apps bring forth another issue which physical brands do not impose or, at least, less than apps. There is a constant competition with developers around the world who can come up with a better solution in an updated version of the app which is similar to yours and thus overtake the leading position.

So, the answer is yes, you need a localization. In order to be highly competitive in the ruthless international market, not only do you need constant improvement and trend following of your app domain, but you need a perfect translation and localization as well. If you avoid or fail to localize your app, the opponent brand developers will not commit the same mistake. And, whose app is the local population going to download more often? Theirs, with the full and impeccable localization tailored to the customers’ needs or…yours? The answer is more than obvious. So, take the effort and invest in the long run into the translation and localization the navigational text, instructions, and any content your app provides. Adjust and update currencies, measurement units, and anything that interacts with local systems. Another thing to be mentioned is app localization testing which should be done in partnership with agencies from the targeted country, specialized in the localization area. In other words, do whatever it takes to make your app prosperous and thriving.

A good strategy for identifying potential new markets is having an ear to the ground. It means you are recommended to check online forums and tech recommendation sites on regular basis in order to see if your product is being discussed, praised or objurgated, by users from other countries. In this way you can leave out options that customers do not find useful, necessary or working. You can update them or even come up with new ones based on what feedback you collect there. Even more, maybe a different version of your app would be more appropriate and acceptable in different countries. For example, if your app is about news in general, a sub-option concerning soccer within the sports news option should be more dedicated to in the countries where soccer is extremely popular, whereas in the countries like India and Pakistan, that place should be given to cricket.

But what does this have to do with SEO?

Search Engine Optimization is based on valuable results. They are composed of algorithms which are designed to help people find what they are looking for, and do it quickly and successfully. In other words, the more value you provide, the higher your ranking will be, which will be immensely supported by localization. If the app store is able to identify that your app is localized, it can sometimes be just enough to get you some points on its own. Actually, the better user experience you provide your customers with, the rankings get improving over time.

As much as English is an international language nowadays, people will still choose an app localized in their own language over the one which is only in English. In case the quality of both apps is equal, of course. This also happens in the bilingual or multilingual markets like Canada or Switzerland. Although inhabitants of Canada speak both English and French, they prefer the app in the language they use in the part of the country they live. Similar is in Switzerland. Even though, a Swiss can speak all four languages, or at least two, he will choose German over Italian or French depending on whether he lives in the part of the country closer to Germany. To conclude, give the audience what they want or need. Do not comfort with your thinking, like “any of the four languages is good enough for Switzerland, I do not need localization in all those languages”. After all, you are a provider, not the user.

Besides, be aware of the other elements of localization. Your app is more efficient if users don’t have to open another app to convert between units of measurement or compare time zones. If you do not enable these options, they will reach for another which does and leave the process of purchasing.

A bad user experience is bad for SEO

As much as a good user experience can improve SEO, a bad user experience can cause damage. Search algorithms are designed to take note of high bounce rates and abandoned pages. An app’s lower rankings will start appearing in case customers continually change their minds and give up on your app before it’s completely downloaded.

Localizing in- app and optimizing for standard search engines are of an equal significance. What users actually unconsciously refer to when they talk about SEO for apps, is in fact ASO. In order to ensure your app visibility in markets around the world, you need to localize your ASO. Various localization elements should be taken into account like:

In conclusion, app and app store localization is a crucial and inevitable adaptations you need to undertake to enable your app a successful starting point in the target market. Aside from mentioned alterations, you may need to make some local adaptations before you can show up in the app store. Since some countries have strict guidelines about copyrights, violent or gory content, complying with them is a must. Therefore, examine your potential market in all aspects and stick to localization as a lucrative method of new markets’ entry.