"5 Puzzling Ways Japanese to English Mistranslation Contorts English" posted on 7/4/2020 at 9:17 AM by publisher.

Foreigners who have visited Japan or lived there for a long time, have always been and remained fascinated with the literal translation of English into Japanese. This phenomenon of mistranslation is especially hilarious to the native English speakers to the extant that they admire the “creativity” of the “artist” and his “courage” to show it in public. Some may even take pictures to prevent the “art” from sinking into oblivion.

All joking aside, the mentioned mistranslation is commonly known as Engrish and is not spotted only in Japan, but in China and South Korea as well. In China, it is famous under the name of Chingrish. Both Engrish and Chingrish derive from the difficulty the Japanese and Chinese face when pronouncing r and l. 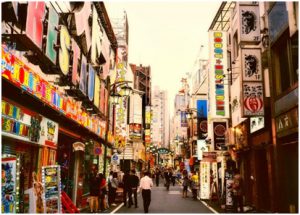 How is it possible that Japanese to English mistranslation occurs in the time of technology and Japan referred as a country of future? That is exactly the problem which leads to bad translation－translation machines and its algorithms application. In its structure, Japanese mostly does not correspond with English－it has fewer words than English, and a future tense is not clearly determinate.

Another issue is that listeners must wait until the speaker finishes the sentence to understand even the general idea. This happens due to the Japanese sentence structure where the verb usually comes in the end. Sometimes a sentence can consist of vague words and the listener or reader or is expected to “read the air” and interpret the meaning.

The term of Engrish is not coined with the intention to mock, although it may seem so. It is just a phenomenon resulted in literal translation done by an algorithm, the user’s trust and his lack of the linguistic knowledge. These results have proved to be mostly comical, occasionally offensive and ridiculous, and even poetical. In this matter, we are going to closely inspect five trends occurring in Japanese to English mistranslation.

Since The 2020 Tokyo Olympics time is approaching, foreign tourism in Japan is trending sharply upward . Apart from that important event, the Japanese yen has fallen and the country is seen as a safe, though still a bit expensive destination.

As a host country for The Olympic Games, Japan is putting efforts to provide inscriptions everywhere so the tourists and contestants can be well guided and orientated. In spite of all organizational measures,  Japanese to English mistranslation can be found all over the country. 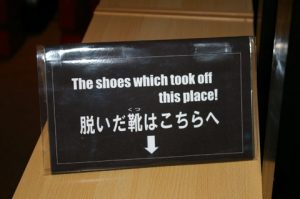 If you go to a place where taking shoes off is required, you may see this appalling inscription on the shelf. What the writer wanted to say is that you should remove your shoes and place them on one of the shelves－not exactly on the spot where the guidance card is and he definitely did not intend to say that some shoes left the place without their owner’s knowledge and the direction indicated is the direction the owner should follow in order to find them.

Another guidance to escape danger is shown in this picture where you can easily spot the ambiguous lines. Is that really what the instruction is about－if you panic, do it as a professional and panic carefully? Hilarious! Another beauty of auto-translation in action! More likely is that, in case of danger, people who found themselves in the situation should not panic and use the escape exit carefully. 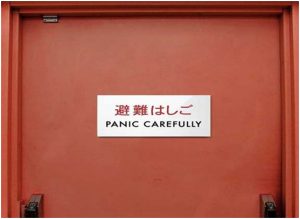 As you can notice, mistranslated guidance is everywhere. They are wrong and funny, but not completely incomprehensible. 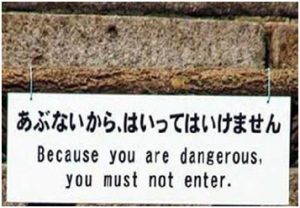 This location seems to be visited by some unusual tourists who perhaps may have bite others. Who actually knows?

2. Japanese to English Mistranslation in Store and Product Names

Many Japanese stores and products have typically Japanese names. For example, Kikkoman which approximately means roughly “tortoise and good fortune,” referencing Japanese folklore – soy sauce, or Genki Sushi with the meaning of “happy sushi” – a sushi chain. Nevertheless, there are stores and products with a certain attempt of cosmopolitan spirit of English. This is believed to bring more profit and refined clients.Japanese brand names of this kind are Pocari Sweat (a beverage brand), A Bathing Ape (BAPE: a street fashion brand), and Collon (biscuits). 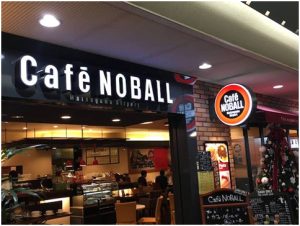 Would you like to go in there and order some coffee or tea? Only for the sake of fun. 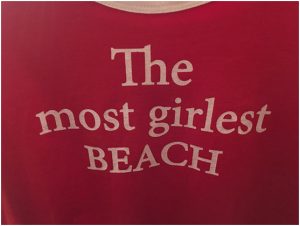 How about this T-shirt? I sure the writer had something else in mind.

While westerners are inclined to see Asian logo graphic characters as exotic, artful, and cool enough to get burned into one’s skin, English letters and words serve only as ornaments to Japanese brands. This aesthetics brings a suave and ingratiating tone to the advertised place or brand. In fact, no one is interested in reading what is the name all about. For a potential customer, it is enough just to see that there is some combination of English letters and, give a quick glance to the product, to make a decision to pick the particular product over others of a similar type.

The same situation is with bars, salons, and restaurants. If their names are in English, or both English and Japanese combination, and the service quality is comparable, guests prefer those premises over the ones with only Japanese inscriptions. 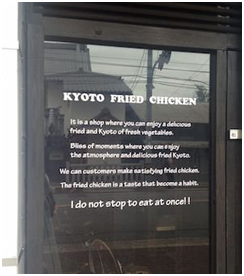 In order to appear ambitious and professional, people may exaggerate and commit terrible mistakes which will make fun of their shops. As much as something can be mistranslated and a convenient material to mock the owner and the place, it can also attract customers who would like to give it a chance despite the horrible attempt of English elegance. One of such shops is the one in photo.

4. Romanization: The Soul of Engrish

The romanization of Japanese is the use of Latin script to write the Japanese language.This method of writing is sometimes referred to in Japanese as rōmaji (ローマ字, literally, “Roman letters”. During this process of romanizing Japanese, the consequence can be unusual at least, helpful, or even wrong. This also variation of mistranslation, although Japanese words are not being literally translated－they are more transliterated.

With all these examples provided and much more appearing every day in the streets of Japan, truly, it is a pity when the Japanese fail at these simple things. Japanese culture is famous for its precision and quality all over the world, so these phenomena is surprisingly present for a long time. This is just not Japanese spirit so many wonder why they do not just hire some foreigners or invest a few hundred yens in a decent translation instead of repeating the Japanese to English mistakes and patterns even in the future. 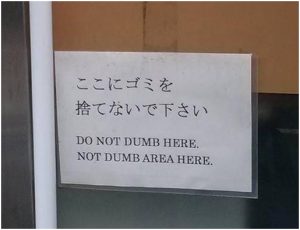 As much as these mistranslations are entertaining and imaginary, something should be done to eradicate them, or at least, reduce them to the certain extent. The mistranslations have a long history in Japan and nearby Asian countries, but in the 21st century they might put an end to its long tradition. If in earlier times the Japanese lack a good translation and did not care much for whether the advertising product or place is ridiculed, nowadays they are given plenty of options to stop this habit. That is one point.

From another perspective, everyone would wonder if the Japanese really want to venture deeper in the translation process. With all the technology they have and their attention to details, it is doubtful that they cannot terminate the phenomenon of mistranslations. Actually, maybe this tradition became so rooted in the society that it is not regarded any more. Maybe it is just another dimension of an unusual world that lies across the Ocean. As long as the place is visited, as long as the product is a lucrative business, why bothering with translations and correctness?  Maybe people buy them and stay there just because these linguistic abuse entices smiles. Who can tell?

Although many language professionals, with Japanese-English language pairs, are available both in Japan or online from any part of the world, the perplexing language abuses will not cease to exist. At least, not in the near future. 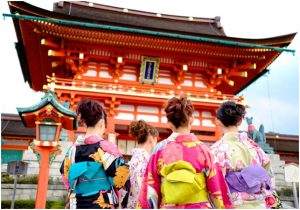 Japanese Brand Mascots: What to Know for Localization

Localization and Entering the Japanese Market

Things You Should Know Before Expanding Into the Japanese Market