Migration, Immigration, and Emigration: What are the Differences?

Although the English language may seem easy to learn in terms of structure and grammar, or, at least easier than some languages, it should not be taken for granted due to its semantics which can be very misleading. There are such words that can be misused in everyday communication, or even, in professional fields like writing, lecturing or journalism. Migration, immigration, and emigration are typical examples to be discussed.

Surely, the top rated favorite destination in the world is The United States. The immigrants who desire to provide a better life and various possibilities  for themselves and their families, certainly bear in mind The U.S as a fulfillment of their dreams. In pursuit of bright future, some immigrants are ready to reach the country even through illegal channels.

As you can notice, these terms are commonly used in reporting, politics, economy, etc, but the term of immigration is the most frequent. Since they are similar and confusing, how can you distinguish one from another and apply it properly?

What is the meaning of migration?

“Migration” is derived from “migrate”, the verb originating from Latin “migrare”. It means to change residence, depart, go away, move, remove, or transport. The derived English verb means to move from one region or country in order to live in another.

Furthermore, this term can be applied to birds and animals as well as people, because they all can move to another habitat, or place of residence when it comes to people.

In the course of history, there were many migrations and reasons for migrations. During seasonal migrations, people usually move to another region in the search of better employment and wage. Some of them were instigated by new resource discoveries, such as the California Gold Rush, when people migrated from the East to the West and even settled there.

In general, migration is the term which immigration and emigration are subordinate to.

Now, when the migration has been defined as a superior word to immigration, let’s explain the term immigration itself. Whereas, migration means moving from one place to another, and can be both temporary or permanent, immigration is characterized as arrival to a foreign country with the permanent stay.

If we take history as a witness, The United States have been built with the efforts and strength of immigrants, which was so beneficial to the country’s cultural, economic and social prosperity that it made it the most influential country in the world.

The immigration process seems to have never ceased. For those who want to immigrate to the U.S, plenty of documentation is necessary. Being usually in the applicant’s mother tongue, the certified translations of their documents are required to be done by qualified translators.

When WWII ended, the refugees from Europe arrived to the American soil. Another big wave of immigrants happened in the 1950s and 1960s, due to the end of colonization in Africa and Asia.

The hard-working guest workers and immigrants in the region’s transport, health and manufacturing industries, helped rebuild the infrastructure in devastated Europe. Despite their tireless work, they were discriminated in terms of working conditions. In some states, minority communities were isolated, while, in others, they were granted citizenship in order to unite different cultures and make them cooperate and contribute to their new country which they swore allegiance to.

It can be perceived that immigration refers to the political and social rights as much as to the citizenship of newcomers. For that matter, there are certain agreements signed to provide people with moving and working more freely. The Schengen Agreement, signed in 1985 by European countries, is a good example which enabled citizens of the countries that signed the agreement, to freely cross their borders. The immigration and asylum law of the European Union (EU) allowed nationals from the European Economic Area the right to reside and work in any of the countries that are members of the European Union.

Differently from the EU, The United States selects immigrants regarding family, employment and humanitarian.

Relocation from the home country to the foreign country is a common denominator both for immigration and emigration. The essential difference is the direction of the migration. If a man, for example, leaves his home country, it means he emigrates from the motherland. The cause of emigration is people’s tendency to enhance their quality of life and increase their chances of employment. Of course, the impact of emigration is visible in forms of positive and negative effects to the economy of the host country.

The decrease in a country’s consumer spending and labor force is visible through the process of emigration. If the job market in the home country does not have enough skilled workers to absorb, it will suffer severe damage. On the other hand, this phenomenon will lead to lowering unemployment rates. Depending on whether a country is sufficient or deficient of workers of a certain profile or workers in general, the number of emigrants can be regulated through the enforcement of different protocols. Therefore, many countries try to retain their highly educated population, while others give benefits to those who want to continue their career on their ground.

Another effect of emigration reflects on financial status of the receiving country considering that the new emigrants must pay taxes according to their earnings.

An important aspect of emigration impact is that the receiving country must ensure employment and social services for the emigrants, but it must protect the rights of the domicile employees as well. Shortly, it means that the government must give advantage to the native-born workers and employ the emigrants only if the job market has left lots of vacancies. This also refers to the wages. The lower wages of emigrants should not influence the income of the domestic population.

According to the Immigration and Naturalization Act, the United States can receive 675,000 permanent immigrants per year. A method of preference is usually unique job skills and family ties. In this manner, the U.S tends to both protect the American workforce and, choose new citizens who can contribute to the American economy. In certain cases, some refugees can receive the emigration status.

With all the abovesaid, the English language speakers may be confused when to use terms like emigration and immigration. Although they have the same meaning, the application is what makes them different.

Immigration is the process of movement into or entering a country which is not a person’s native country. It is derived from the verb “immigrate” which means to leave the country where the person was born in order to move to another country and settle there permanently.

Emigration means to leave a person’s country of birth to reside and work in a foreign country. This noun is formed through the process of derivation from the verb “emigrate”. To emigrate means to leave. 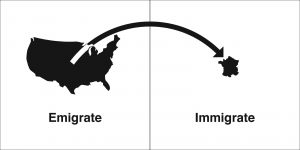 To understand these fine differences better, we will introduce an example. A person was born and raised in The Czech Republic and intends to leave the home country , and move to the U.S and become an American citizen.

In details, the mentioned person is an emigrant from the Czech Republic, and an immigrant to the United States at the same time.

To highlight the distinctions, here are the crucial points:

Through prefixation, migrate and migration have formed new terms like immigrate and immigration, emigrate and emigration. The prefix”-im” and sometimes ”-in,” means into or in.

To sum up, migrate and migration relates to the moving process from one place to another and is applicable to both animals and people. As one set of subordinate terms, immigrate and immigration is an action of permanently moving into another country, which can be done only by humans, while emigrate and emigration is another set. They refer to the permanent departure from a country of residence. It is can only be used in the context of the departure of humans as well. Therefore, be very careful when discussing these matters and good luck!

Becoming a U.S Citizen and How Long Does it Take?

Multilingualism in the United States