Every linguist in the world has had their gears grinded at least one when they saw the horror of translations done by a machine. Everywhere a translator or linguist goes it’s like they cannot help but notice all of the wrong grammar and mistranslations.

When it comes to the Chinese language, common English words like “the” are not used. There is also no past or future tense in this language. Chinese also has no letter case tense and it follows very different grammar rules, there are also circumstances where the same character is used to convey different meanings. In most cases there are no direct translations of words or phrases which lead us to English sayings like “no can do” and “long time no see” which come from the Chinese language. During the 2008 Olympics in Beijing, a hotline was set up for people to be able to call in and report these “Chinglish” signs. The signs were then reviewed and edited by English professionals.

For the most part these translations go wrong when it comes to translating 4 characters or more. Like English, the Chinese language contains many idioms. An idiom is a group of words established by usage as having a meaning not deducible from those of the individual words. “Rain cats and dogs” or “between a rock and a hard place.” Chinese idioms usually revert back to history which is why they are easily understood by a Native Chinese speaker. Chinese characters could be compared to the haiku poem.  When a phrase like “stay off the grass” is translated it comes out more like “the grass is smiling at you, please be kind.” While something like that is better off not being translated word for word, you now have a better understanding of what it means!

Some of the most common “Chinglish” signs can be found in Shanghai – which believe it or not most people speak English, perfectly! So, why not ask a Native English speaker to help out with the proper English? Well, this is because they usually charge a fee that most are not willing to pay. Translating is not a “high priority” task, which mean most are not going to invest the money in having it done professionally. Instead, most wait until they find someone, well anyone in most cases who is up for the task. In many cases they rely on college student who studies Chinese for a few years, and this person knowing they can write whatever they want, including obsinities, takes full advantage of the situation. Which is why when it comes to “Chinglish” translations, you will see a random curse word thrown in!

Please have a laugh at some of our favorite Funny Translation Signs! 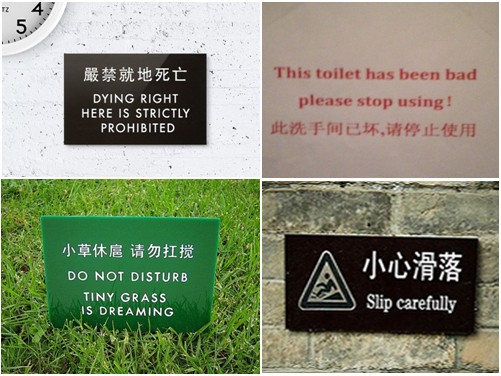 While these mistakes can be absolutely hilarious, a little vulgar, sometimes inappropriate and tourists are known to search for them – in 2017 authorities in Beijing so not find this a laughing matter. They have set forth guidelines that must be used going forward to prevent these types of “English translation” from appearing in the future in industries such as entertainment, food and beverage as well as tourism.

Localizing to Enter the Chinese Market