Your on the Go Translator 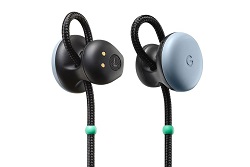 Among the new handy features, there is an interesting feature “earphone detection in the ear.” Now, with an undesirable drop out of your ear, the intelligent system will insure you. Let’s say you went from work to home and were listening to music or were on a train, and it braked sharply and one of the headphones jumped out of your ear, the system will automatically stop the music playback until you put the earphone back into your ear. One more worth seeing innovation – additional way of managing gestures. For example, now by double-clicking on the right earphone, you can listen to notifications or turn off the Google assistant. After the update, several additional options for double and triple clicking appeared at once, in order to minimize the user’s contact with the phone itself. By the way, absolutely all the functionality of headphones is on the right side. If something happens to the right earphone the left one will not be able to be used as a remote control.

Google represents this project in the third quarter of 2017. Wireless bluetooth headphones seemed a brilliant competitor for the Apple AirPods released a year earlier, which, by the way, went on sale at an identical price. However, the headphones are connected together by a wire, which is made of rag cover to increase the practical use and long life of the headphones. This feature allows you to carry headphones around your neck without taking them off. In the case of the variant from Apple, they need to be placed in the box every time. However, according to the words of those who have tried it on their own, putting Pixel Buds into a box is not so easy. First you need to put the earphone one after the other in the specially assigned place of the box, and then wind the connecting wire around the proposed area. Among the minuses, there was also a fact that the earphones cannot be held in the ear properly, so using this model for an intensive workout is not so convenient.

During the presentation of the first version, the real furor made the possibility of simultaneous translation, available when using this device. Translation from one language to another was made with a delay of not more than two seconds and did not apparently have any complaints about the quality. It’s like having your own translator for 40 languages (Google says this amount is supported).

The translation function is also available by clicking on the right side, after which the Google translate application is launched on the phone. The user in the headphones, standing next to the interlocutor, can gradually speaking the text in his own language, and the phone will translate and pronounce out loud the translation into the required language. You can also turn off the sound and just show the interlocutor translated text from the phone screen. To answer, the interlocutor needs to press the button on this phone and then the person with the earphones will hear translated answer through them. However, in practice this is not very convenient, so standing next to each other it is easier for the interlocutor to simply answer in his own language. There is also a useful feature like memorizing the language. You can say to the earphones “be my interpreter”, then they will remember the last two languages ​​and you will not have to choose from the list every time.

Unfortunately, this feature is only available if you purchase a Pixel smartphone. Any Android owner can enjoy all the rest useful functions. For Apple users, they are the most ordinary of headphones.

6 Things You Should Know Before Hiring App Translator