How to Speak Pig Latin? 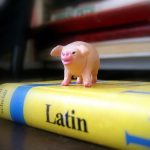 Pig Latin isn’t really a language that is spoken properly. It is one of the pseudo, or fake languages spoken by English-speaking people, mostly in the United States of America. This so called language can be used by adults, but mostly children are its astonished and amazed speakers. There are approximately 7000 recognized languages in the world and who knows how many dialects, language forms and pseudo languages.

Many people haven’t even heard of this “language” let alone spoken it in any period of their lives. Not even all English speakers are familiar, or even fond of it. It has nothing to do with the real Latin language. Is that a sigh of relief that I am hearing? Go on, I don’t mind at all! Anybody who has ever learnt Latin knows how it may be difficult and burdensome. All that grammar and syntax rules, as well as remembering noun gender…Luckily, what Pig Latin has in common with it is just a silly name. It has nothing to do neither with pigs or Latin. A “language” that sounds like total nonsense to “non speakers” is very popular and loved by children or parents who enjoy spending time with their offsprings playfully. However, it is not completely relieved of all rules. There are some rules to be followed and we are going to discuss then shortly.

The Four Rules of Pig Latin

Although, these rules are do not require a lot of time to adopt and apply, one has to practice in order to pronounce the word correctly. While it will seem as another gibberish to a non-speaking passer-by, your pronunciation mistakes will not escape an experienced ear. Here are the four basic rules of Pig Latin:

Hare are The Four Rules of Pig Latin

Although, these rules are do not require a lot of time to adopt and apply, one has to practice in order to pronounce the word correctly. While it will seem as another gibberish to a non-speaking passer-by, your pronunciation mistakes will not escape an experienced ear. Here are the four basic rules of Pig Latin:

Rule Number One – Words Beginning with a Consonant

When a word begins with a consonant or a consonant cluster, what you need to do is remove all of the letters up until the first vowel, then place them at the end of the word, and finally add the suffix ‘-ay’. Does it make sense? What a silly question! Are you confused how to apply this rule? Don’t be. We are going to practice using many examples.

For example, the word “food” turns into “oodfay” in Pig Latin. The word “love” becomes “ovelay”, or “fun” is converted into “unfay”. As you may have realized, the initial consonant has been moved to the end of the word and the only thing left is adding “ay”. Here are more Pig Latin words: illowpay, immingsway, airhay, usicmay, isskay. Can you decipher them? Can you break the code and find the secret word? Of course, it is so easy and fun. I bet your nieces will worship you for this!

This rule also applicable for words that start with a consonant cluster such as brother, brush, practice or stupid. So, a brother becomes otherbray; a brush is ushbray; practice acticepray and stupid upidstay.

In some proper English words, a consonant might have a soft sound before a vowel, but it can acquire strong sound in Pig Latin word. In words like cell, gel, gist, sugar and many more, you can see for yourself: ellsay, eljay, istjay, ugarshay. Be careful how you utter these words because they need to keep the initial consonant sound.

If there is a word beginning with a vowel, you just leave the word as it is and add the suffix ‘-hay’ to the end of the word. This is the most common variant, but others are not so rare either. They include adding ‘-yay’ or even ‘-way’. To your surprise, you may discover that it does not make a difference which of these is used.

Therefore, “elephant” transforms into “elephanthay”; “eat” turns into “eatway”; “air” “airhay, airyay”; “egg” “egghay, eggway, eggyay”. Choose any suffix version you wish, but I recommend you stick to it just to avoid further confusion, especially if you are try to speak Pig Latin who has just started learning it.

This rule is to be followed when a word starts with a vowel and the vowel sounds like a vowel. However, there are words with the initial vowel written, but pronounced as a consonant. Those words are like one, unit, universe, unique, euro, euphoria and many more, usually starting with the vowels e, o and u. In this situation, since Pig Latin is not a written, but a spoken language, a speaker should apply the first rule which refers to the words starting with a consonant or consonant clusters. Bearing this rule in mind, the word “one” will become “unway” due to the starting sound “w” which is moved to the end of the word and the suffix -ay is added. Words like unit, universe, unique, euro and euphoria will turn into unityay, universeyay,unikyay, uroyay, uforiayay. 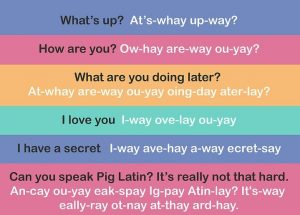 Being a spoken language, Pig Latin’s rule application is closely tight with how the word is pronounced rather than how it is written. So, if you do not know how to say a proper English word in Pig Latin, just pay attention to the regular English pronunciation. Once you determine whether the beginning sound of the word starting with the letter “y” is a vowel or a consonant, you just apply either the first or the second rule. For example, the “y” in ‘yolk’ is a consonant sound “j”, whereas the “y” in ‘fly’ is a vowel sound “ai”. Similarly, in words like cry, why, baby, happy, funny, the letter “y” is a vowel, while in words like yellow, your, yacht, it is a consonant sound. In that way, baby is abybay and yellow is ellowyay.

Since Pig Latin is another pseudo language or a children’s code language, no one will tell you that you have made a mistake in conversion from proper English words to Pig Latin words. Anyway, to be able to recognize what the other speaker is saying to you, these rules require that minimum. When it comes to compound or hyphenated words, you may follow an appropriate rule with just adding suffixes at the end. The problem with both groups is that they will be obvious if you treat them as simple words and other speakers will guess the meaning without diving into Pig Latin at all. Then the fun is gone! For example, if the word “ice cream” is not split up, it would be something like “ice creamway”. The meaning is obvious and the language is not charming anymore.So, if you wish to create a more interesting and intriguing word, you had better split a compound or a hyphenated word into those two or three words it consists of. By splitting “ice cream” in two independent words, you treat them separately. Therefore, the first word starts with a vowel and is under the second rule application, so it becomes “iceway”. The remaining word starts with a consonant and it is under the first rule. Adapting to the first rule, it transforms into “eamcray”. Here are more examples of hyphenated words:

What are your impressions now about Pig Latin? Is it still difficult as you thought at the beginning of this journey? I guess not! Finding it entertaining or not, it is not a waste of time learning it if there is anything to learn. What you might need is another enthusiast or a child to entertain yourselves as you share these tricks.

Since Pig Latin is not an actual language, it may serve you and your friends as a code language in some environments. Here are some simple sentences to expand your language skills and have fun while practicing.  Enjoy, for what else is this life for!

Do you speak Minionese?