Do you speak Minionese? 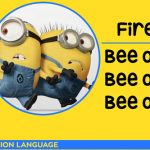 The story about the Minions started with Despicable Me series. This animated media franchise consists of four feature films, fifteen short films, and additional merchandise. First of all, the foundation to the successful animated series was set in 2010 with the debut Despicable Me story. Later, another two, with the same title, followed in 2013 and 2017. Between Despicable Me 2 and Despicable Me 3, there was a prequel of Minions in 2015. However, these movies comprise the famous four stars of this popular animated franchise, and give place for another storyline to evolve and take its own course. 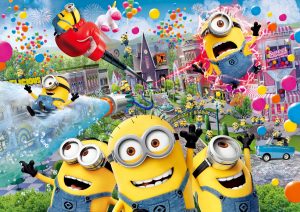 In terms of media, spin-off (or spinoff) is a radio program, television program, video game, film, or any narrative work, which develops their own life and sometimes become even more entertaining and popular than the original media it was extracted from. In fact, such stories and characters are derived from already existing works, focusing on more details and different aspects from the original. It is nor surprising when directors say in their interviews that the character they introduced as a side one, took over the plot and emerged as a dominant one. Another aspect is that the audience often give rise to a certain character and their role leading to the character’s leaving the main story and becoming a successful game protagonist, such as Lara Croft. This popular game character, for example, started as a main heroine in an adventurous blockbuster Tomb raider in 2001, but outgrew the original movie in the first place. Such destiny is already befalling little yellow creatures named Minions.

Obviously, the plot from the previous and original storyline revolving around the activities of the series’ principal protagonist is shifting to the action and narrative thread of usually another protagonist, who becomes the central or main hero of the emerging storyline of the new sub-series. Not only in modern multimedia is this getting common, but such occurrence is noted in Mark Twain’s novel about Huckleberry Finn whose used to be a friend and a companion of Tom Sawyer in their childhood adventures, but then, Twain decided to follow Finn’s own path through the world of the picturesque Mississippi River. However, it is not common that multiple characters like Minions get the main role.

Here, the storyline centers on Gru, a reformed super-villain. He later marries Lucy Wilde and becomes a father of three adopted daughters Margo, Edith and Agnes husband and secret agent, and a secret agent. The story will continue upon the release of the sequel to Minions titled Minions: The Rise of Gru in 2021. 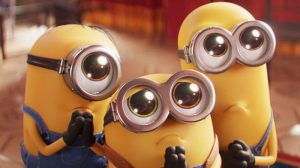 The introduction of invented languages in the movies is an old and well-known feature. Even though they might be artificial, a linguist is usually hired to waive some pattern that the new language should adhere to, which means the invented language itself is not just a bunch of unrelated words and disruptive phrases. Likewise, Star Trek producers hired a linguist to create the Klingon language. Similarly, the developed languages by means of linguistic efforts of the experts are Elvish in The Hobbit and The Lord of the Rings, Dothraki in The Games of Thrones, the Pakuni in the Land of the Lost and Na’vi in Avatar.

The creation of Minionese

Watching all the sequels of Despicable Me and spin-offs of Minions, people have wandered all that time about the language they are actually speaking. At first, it seemed as just one more sweet and soft spoken gibberish talk, completely making no sense at all, but the funny side got a bit serious upon the first notice of certain full meaning words. The invented language that Minions are using as means of communication in the animated series may be referred to as Minionese.

Unlike the habit of hiring an expert, the language of Minions is reportedly only a creation of the film’s directors, without the touch of the professional hand. The directors, Pierre Coffin and Chris Renaud, even dubbed the Minions’ voices in the Despicable Me films and had fun creating the little yellow characters’ speech, adding to their worldwide popularity. To avoid the waste of time and energy while teaching all of the voice actors the fabricated language, the two of them even recorded some of the ‘Minionese’ on their own. Therefore, if you are curious enough to decode their talk, try with Google Translate, or the Minionator app released by Best Buyers to enable users understand better Minionese. 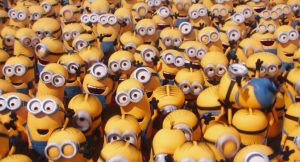 Aside from a popular song by these little characters that has become a popular Dubsmash track, many Minions quotes have also figured in popular Internet memes leading to the increase of the global curiosity of the Minions’ native language. There is at least some hidden meaning behind all this, as much as most of the words spoken or attributed to the Minions don’t make sense, and sound like:

Plain gibberish mixed with random foreign words, as the little yellow creatures’ communication was addressed to, is both known as Minionese or the Banana Language, apparently in reference to the popular Minions song. Furthermore, the Minions language is mostly unintelligible or barely an intelligible kind of speech introducing only some comprehensive words from the Spanish, French, Italian, Filipino, and other foreign languages.

Audience also notices the presence of various words that refer to food. In the song, there food items are a banana and a potato. The little characters are also spotted to be saying “poulet tiki masala”. This dish is the French equivalent for “Indian chicken dish”.

Apparently, the Minions combine a few different languages into their dialect and onomatopoeic words. A totally made-up language of the yellow henchmen in the story, being patched out of English, Spanish, French, Filipino, and also, a little bit of Italian words brings the beloved beings the title of low-key bilingual geniuses.

Onomatopoeic or demi-onomatopoeic words, in addition the words that emulate the sound of the things or events they represent, are being intentionally mispronounced English words to add to the effect of adoring and becoming a soft-hearted to pill-shaped sweeties.

In order to try implementing an analytic method of the notable features, we may skim through the following examples of Minion-speak together with their counterpart words in English and some notes. However, this “research” cannot and will never be reliable since the starting point, the Minions’ language itself, is just a funny playfulness of the directors who themselves never stated anything official about whether the translations various websites are offering is true or not.

Once again, since these translations are not official and should not be a subject of dwelling on so deeply, we are going to try to give our interpretation of the funny language, like many eager fans just have been looking for patterns and means of decoding.

The multilinguistic appearance and blending

Although the majority of words in Minions is borrowed from English, Spanish, French and Italian, there are even words from Indonesian, Hindi, Filipino and Japanese. The most easily noted are:

Para tu and la boda － where the first one means “For you” and the latter one “marriage or the wedding”;

Mera Chota － My little one in Hindi;

Pwede na － Can we start? in Filipino;

Gracias － Thank you, in Spanish;

There is no point in banging your head against the wall trying to decipher the language of the invented characters. It is better to stick to what Minions director Pierre Coffin said about the language. According to him, the language itself is silly, but it is funny when the audience think that the Minions are really communicating among each other while, in fact, they are uttering some gibberish. If you do any research about the full meaning words across the global languages found in this animation, do it only for the sake of fun and nothing else!

How to Speak Pig Latin?