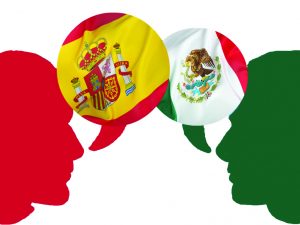 A trend we’ve noticed at Translation Cloud lately is a rise in requests for Mexican Spanish translation, year over year. But we’ll let you in on a little secret: if you speak English, you may already know some Mexican Spanish words and phrases and not even know it.

Read on for a list of some of our favorite and most interesting examples of Mexican Spanish in English. But first, some quick background information…

Spanish is the second most-spoken language around the world, after Chinese and before English, though the language itself is very diverse, with at least twelve recognized currently-spoken variants. Variants and dialects of Spanish are typically formed geographically; in addition to various countries having their own unique variations on the language (with different spelling and grammatical rules between Mexican Spanish and Chilean Spanish, for example), entire countries may have their own unique dialects from region to region. The “Old-World” Spanish spoken in Spain varies from the North, Central, South, and other regions throughout the country, for example.

In America, one of the forms of Spanish we are most familiar with is Mexican Spanish, chiefly due to Mexico being our largest neighbor (by population), but also because Mexican-Americans account for nearly two thirds of the Hispanic population in the United States. Additionally, Mexico is one of the largest international destinations for American tourists on vacation—so it’s no wonder Mexican Spanish has made such an impact!

Some people seem to be very confused when they hear Mexican Spanish as a dialect option. The native language of Mexico is Spanish. However Mexican Spanish differs from European Spanish. The differences come in when it comes to vocabulary, pronunciation, and other small things. I like to say Mexican Spanish has its own flavor.

Spanish Mexican flavor dates back to the 16th century when the Aztec Empire existed in Mexico City which was rebuilt from the Aztecs Capital for the Spanish Forces.  When this happened the Native Indian languages mixed and were intermingled and some Native Indian words and grammar were borrowed, however it was not enough to make this language one of its own, rather just a dialect.

But did you know that a number of words we take for granted in English are actually loanwords from Mexican Spanish? It’s true—you’ve been speaking Mexican Spanish for years and probably didn’t know it!

Here are some of our favorite examples of Mexican words and phrases that English speakers use every day:

These are just some of our favorites, but there are countless other examples out there! If you know of any more, please let us know in the comments below.

Mexican Spanish has also some slang words which are derived from features of English loan words or Anglicism. This has to do with the closeness to the United States. It also can be linked to the migration of people throughout the years. Mexican Slang includes words that are not even known in Spain. These slang terms also mean things completely different then what they translate to literally!

Below are a few phrases and words so you can see what we mean:

Even though all Spanish speakers may comprehend some written formal Spanish, Mexican Spanish slang and dialect is very different. A person from Spain will not be able to understand this dialect. Each Spanish speaking country uses different verbiage, phrases, pronunciation and contexts for historical and sociological reasons. That is why in the professional translation market there are several types of translation options as Latin Spanish, Castilian Spanish or Mexican Spanish.

If you’re looking to have an audio, video file, text message or email translated for legal purposes or personal use, there’s no online tool that will give you the correct meaning.
Our specialists also focus on the smaller language groups which include – Mixtec, Yucatec Maya, Mayo, Yaqui, etc. Because sometimes there are so difficult texts that only specific Mexican Spanish translator is able to handle.